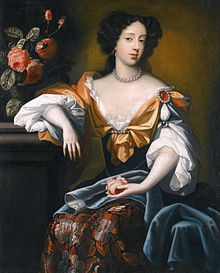 Chapter one of Reign of the Marionettes opens in 1674 with the arrival of James of York’s second wife; the fifteen-year–old Mary Beatrice of Modena, to London. As can be seen in this portrait by Simon Pietersz Verelst, painted in 1680, she was a beautiful young woman. I enjoyed developing Mary Beatrice’s character in the novel. There is something very likeable and appealing about her.

This marriage was not well received by the Protestant Lords in Parliament; they had not been consulted. The marriage of the heir to the throne to a Catholic also confirmed their suspicion that James of York had converted to Rome and sparked fears that any children born to this marriage would be raised as Catholics. Not since Queen Mary I, had England had a Catholic monarch and people feared this happening again. Mary’s legacy for burning Protestants at the stake was legendary.

Rumour also abounded that the Great Fire of London, which by all accounts was nothing more than an unfortunate accident, had deliberately been started by Catholics, to burn out Protestants. Indeed, any disaster at this time was blamed on Catholics.

Mary Beatrice arrived in London, bewildered by the people’s response to her and tearful at having to leave home and marry York. The husband this fifteen-year-old Italian Princess had not met until her wedding day was forty-years old, scarred from smallpox and already had two daughters from his first marriage; they were only a few years younger than her. James of York also had a stutter, making it difficult for her to understand what he said. When Mary Beatrice had been informed she was to be married, she had railed against this; she had already decided she wanted to become a nun. The Pope intercepted, and she married York.

Despite their differences, Mary Beatrice soon grew to love her husband dearly, but tragically, her married life was marred by frequent stillbirths or birthing children who died in early childhood: Between 1674 and 1684, Mary Beatrice had two miscarriages, delivered three stillborn babies, and birthed five live ones – none of whom survived. Mary Beatrice reacted badly to the loss of her children and soon despaired of ever bringing a child to adulthood.

When she finally gave birth to a healthy boy in 1688, James Francis Edward Stuart, word spread that he had been brought into the birthing chamber in a warming pan. The rest is history.